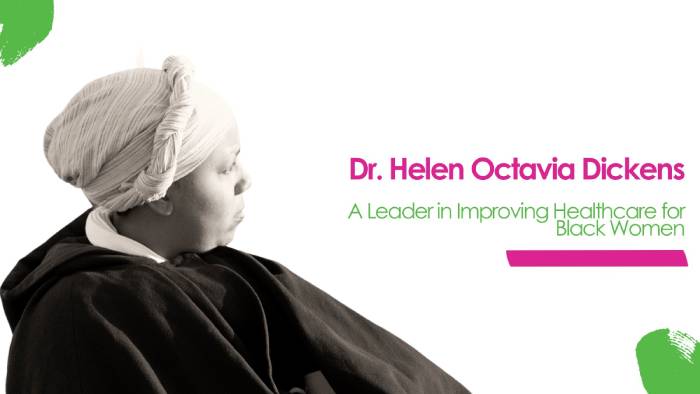 Women’s health is multifaceted, with much left to be discovered and understood. It has been culturally ingrained in women to speak softly about their sexual health and the diseases associated with the female reproductive system. There is a degree of shame connected to women’s health and among black women, a sense of distrust in medicine from trauma rooted in history.

Accessible knowledge gives women the opportunity to recognize that the link between disease and morality is no more than a man-made construct developed to silence women with very real and serious health concerns.

Today, giving women around the world the tools to self-advocate remains a work in progress, but in the 1950s Dr. Helen Octavia Dickens witnessed the barriers black women faced and took immediate action.

Discussing the Henrietta Lacks Enhancing Cancer Research Act earlier this year led me to investigate similar cases in which black lives were taken advantage of in the name of scientific progress.  I came across the BBC’s Future series that dedicates a piece on the life and accomplishments of Dr. Helen Octavia Dickens.

Author Rachel E. Gross provides insight into the life of the specialist in women’s health who wanted black women to understand the benefits of modern medicine despite their distrust.

As a medical student bearing witness to the development of the Pap smear for cervical cancer detection, Dr. Dickens saw that it was possible for women to increase their chances of survival by treating cervical cancer in its early stages.  In her American Cancer Society van, Dr. Dickens drove around Philadelphia offering free Pap smears and educating women in the black community.

The activism of Dr. Helen Octavia Dickens is brought to light in the work presented by the BBC. Dr. Dickens is described as more than an advocate for women’s health, but the progressive presence needed to address the trauma black women held on to in their reluctance to seek medical care in a healthcare system dominated by white men.  Gross elaborates on the origins of this trauma to further emphasize the importance of what Dr. Dickens represents.

The story of Henrietta Lacks serves as an example that shows the little value white medical professionals put on black lives. Henrietta’s doctors harvested her cells for research without her consent. While she made monumental contributions to cancer research, Henrietta Lacks did not know about the mark she made on history.

Gross also includes the fact that in documented texts, doctors would not disclose her race, and further reduced her presence by the naming of HeLa cells.

Medical progress made possible by the unacknowledged contributions of black lives is not only demonstrated in the story of Henrietta Lacks. Gross brings awareness to Dr. J. Marion Sims, said to be the father of modern gynaecology, who purchased enslaved black women to be used for gynaecological research.

During the dark days of slavery in the mid-1800s, consent of Sims’ research subjects was not needed and to further express the deplorable nature of his research, these women underwent experimentation without the use of anaesthetics.

By reminding readers of this reality in medical research, Gross reveals where fear and distrust among the black community with respect to healthcare came from. This fear is well-warranted and Dr. Helen Octavia Dickens was aware of this.

Dr. Dickens excelled as a medical student and made it her mission to shift the view of women’s health by providing information black women were able to access. She learned about the value of having a Pap smear and how it could have helped save the life of Henrietta Lacks who died of cervical cancer.

Rachel E. Gross captures the need for social change Dr. Dickens was adamant to pursue knowing that black women were neglected by the healthcare system.

Dr. Dickens became a relatable and honest healthcare provider who was able to earn the trust of the women she met.  She made women in the black community feel included, which makes her a symbol of progress in the path towards healthcare equity.